This is a guest blog from summer intern Vaasudev Narayanan ( @vaasudev96 ).

In this internship project, we propose a novel method for player performance evaluation in football. We work on data from a major professional football league. We incorporate the spatial context of all the players on the field to calculate the value of an action.

Why should we care about a data-driven player performance evaluation method for football players?

Now that we have established the need for such a method, let us look at the challenges involved in developing one.

We base our approach on Actions Speak Louder Than Goals: Valuing Player Actions in Soccer by Decroos et al. Feel free to jump to ‘Observation About Approach’ section if you are familiar with the paper.

In football, the objective is to win the game by scoring more goals than the opponent team. With this simple philosophy, we rate players highly who perform actions such that:

That is, we value players who perform actions which have both high offensive and defensive value.

Value of an action

So, the overall value of an action will be the sum of its offensive value and defensive value.

Given the above setup, we can rate a player based on the set of actions performed by the player, normalized by the play-time.

\(A_p\): Set of actions performed by the player

So, we now have two classification tasks at hand!

In order to perform the classification, we encode the game state by a combination of action-specific and game context specific features. For constructing the ground truth, we label a particular game state as positive if a goal occurs in the next \(k\) actions, where \(k\) is a hyperparameter.

Things we liked about the approach:

Things we felt were lacking in the approach:

With these observations in mind, we now present the way we attempted to improve their model.

The entire player evaluation framework rests on how well we can estimate the scoring and conceding probabilities.

Hypothesis: In order to better estimate the goal scoring/conceding probability, we need to incorporate the spatial context of all the players.

We hypothesize that along with the action-specific and game-specific features (i.e. the baseline features), the positions of players (home + away) who are not actually performing an action on the ball also contributes to estimating the goal scoring/conceding probability.

To test this hypothesis, we engineered different features based on the tracking data coordinates of the players.

Displacement: Relative position to the player with the ball

Trajectory: Average direction the player moved in the last 2 seconds 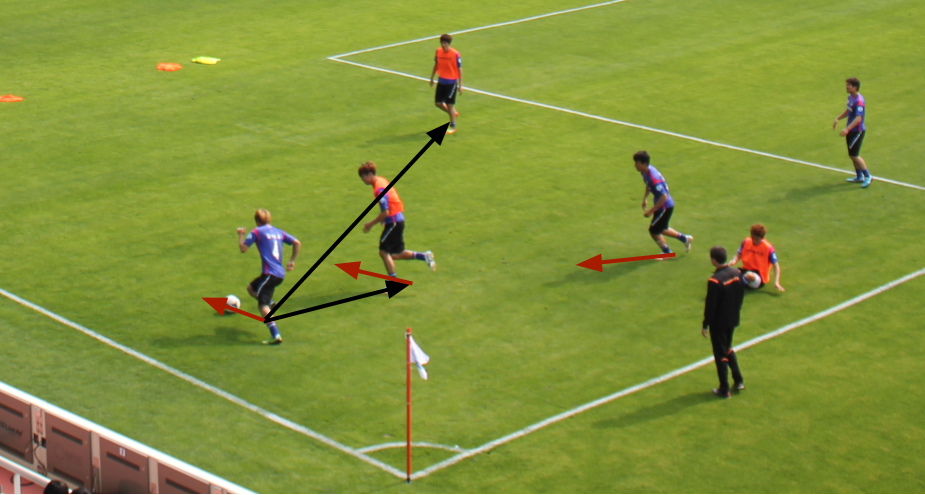 We simply appended the tracking features to the baseline features and trained classifiers with the new feature set. 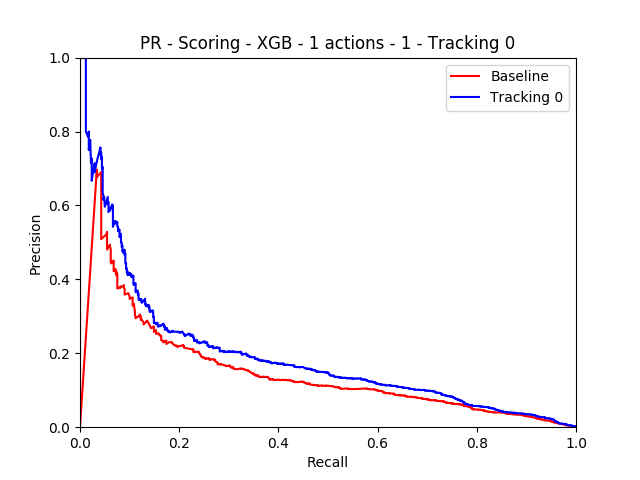 For the scoring model, we observed performance improvements of about 35% on the mean precision metric. We achieved the best performance for Absolute Locations + Trajectory. 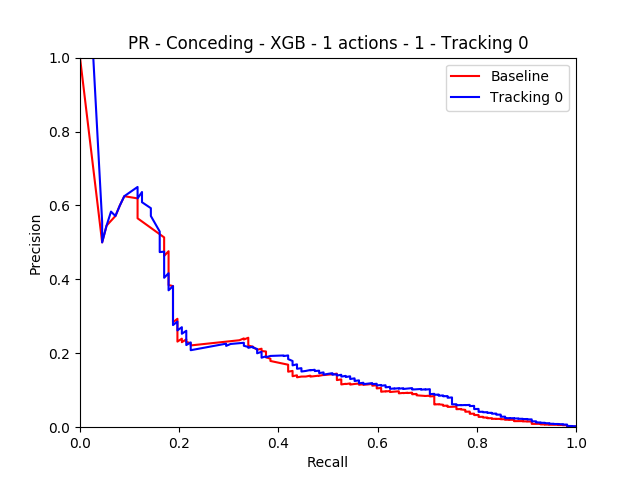 For the conceding model, we didn’t observe any difference in the model performance with the addition of tracking data. We also conducted analysis across the two hyper-parameters: \(N\) and \(k\), where \(N\) is the number of actions used to represent a game state. We wanted to see the change in model performance across a range of these hyperparameters. 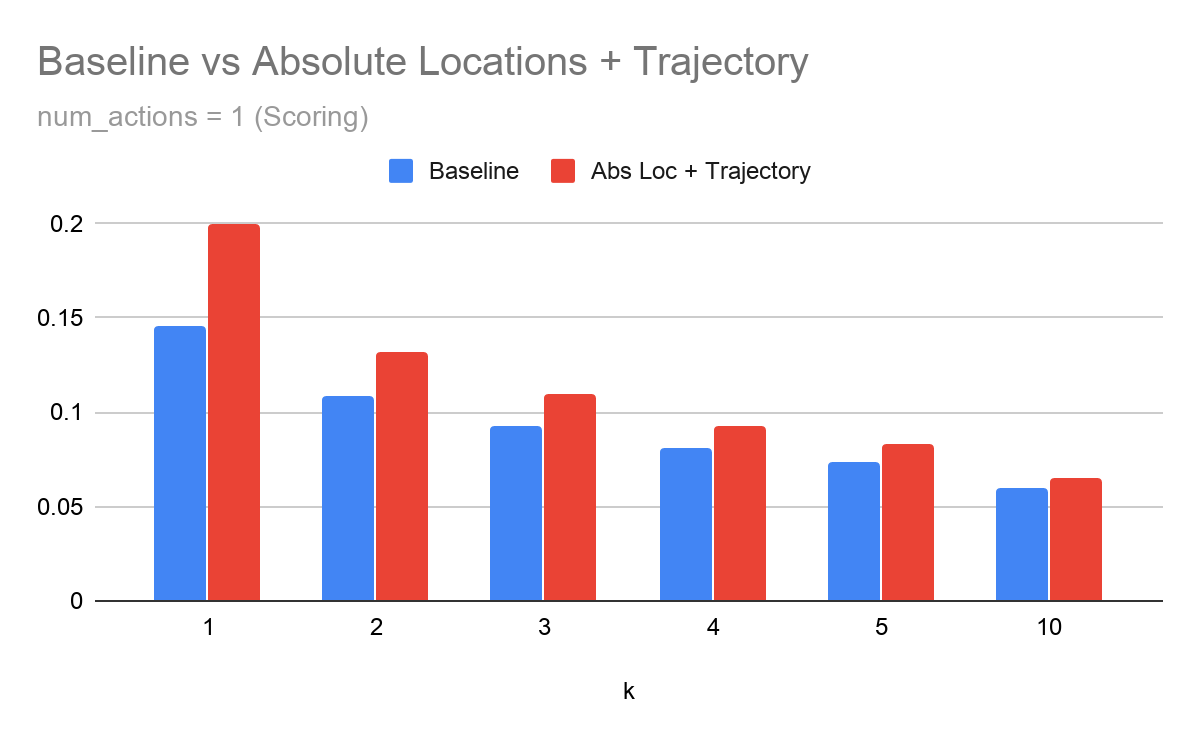 For the scoring model, we observe that as \(k\) increases, the tracking features are not able to improve model performance. 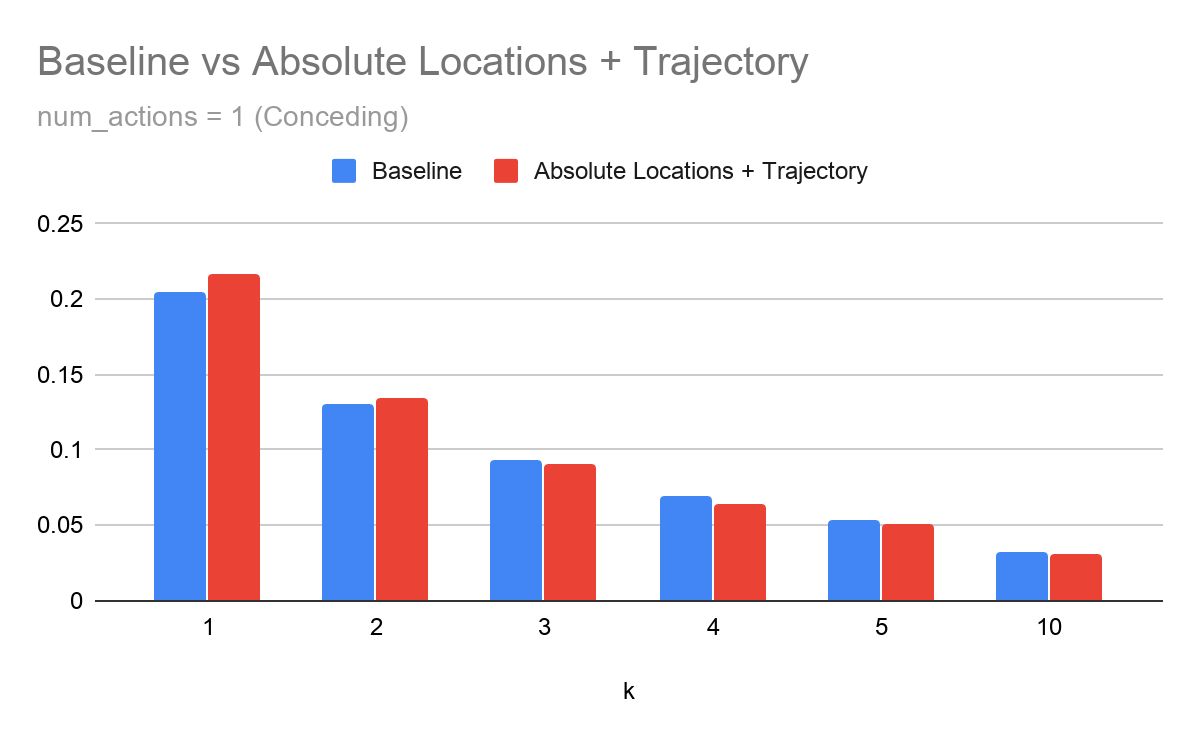 For the conceding model, we observe a similar trend, but the performance is roughly similar and for larger values of \(k\) the tracking extension actually performs worse than the baseline approach by a small margin. 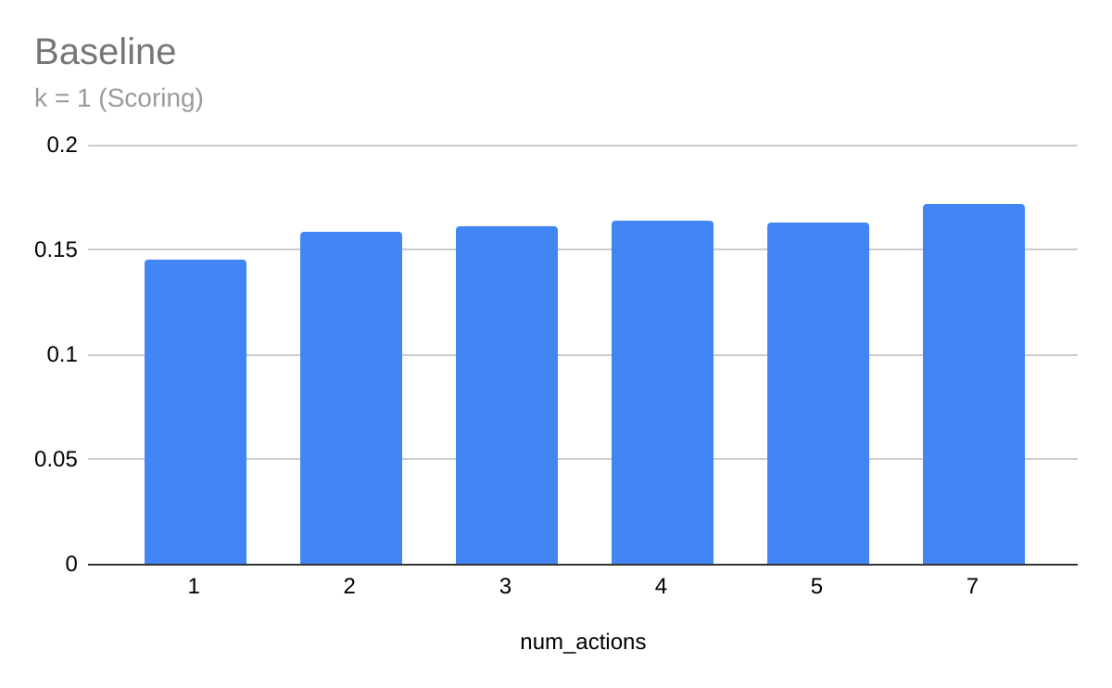 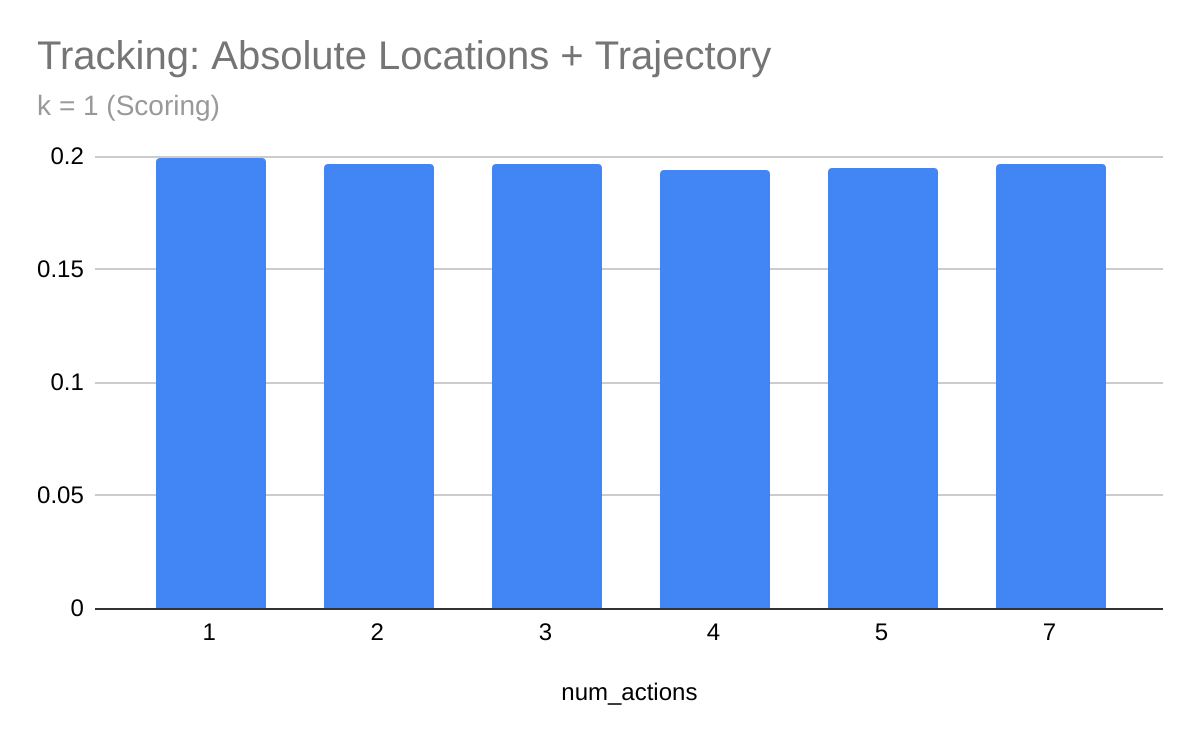 For both scoring and conceding models, we observe that varying \(N\) did not affect model performance significantly.

We found that spatial context of the players who are not directly involved with the ball, plays an important role in estimating the probability of scoring by a team. We show that by simple extensions we could achieve a decent improvement in model performance. It will also be interesting to see why our extension was not able to improve the performance of the conceding model. We feel that there are better ways to capture the spatial and temporal context of the game and hence improve both the scoring/conceding models.