This post is contributed by Shota Imaki, who was an intern and a part-time engineer at PFN. Japanese version is available here.

I am Shota Imaki, a Ph.D. student majoring in theoretical physics. During my internship, we studied Deep Hedging, which had captured my interest for a long time, and I am writing this to summarize this work.

Deep Hedging is a grand-breaking framework to hedge financial derivatives using deep learning. It has, however, been notorious for the difficulty of training. We proposed a “no-transaction band network” to achieve a 20x speedup of training. Deep Hedging can now learn to hedge and price exotic derivatives in seconds.

To our great honor, we receive the Incentive Award of the Japanese Society of Artificial Intelligence (JSAI) for this research. We released minimal implementation of the work as well as a PyTorch-based library for Deep Hedging, PFHedge. 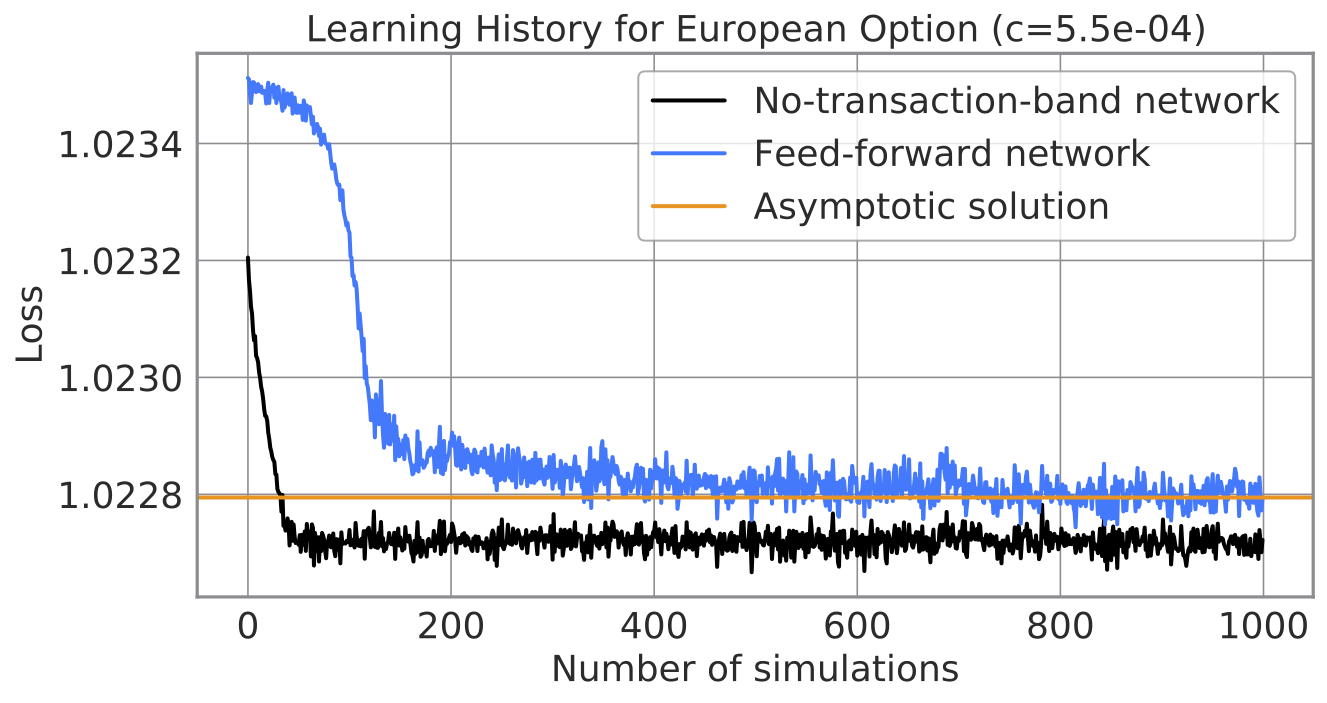 Our research aims to automate hedging associated with securities companies’ dealing in derivatives. Let us first describe what derivatives are, how hedging works, and how Deep Hedging automates it.

Derivatives are securities derived from ordinary securities such as equities, bonds, and currencies. An equity derivative, for example, settles a payoff that depends on the trajectory of the equity price. Examples include the following options:

Derivatives enable pliant insurance and investment. Entities may use derivatives to insure against their uncertain cash flow or balance; Investors may flexibly make their position with derivatives. Derivatives are indispensable instruments for modern risk management and advanced investments. That is why derivatives have thrived for a long to develop their trillion-dollar global market.

In an idealized market without transaction cost or other frictions, one can precisely compute the optimal hedging strategy. It is optimal to perfectly offset the risk with incessant trades that cancel out the “sensitivity” calculated based on financial models.

The real market, in contrast, has transaction costs and thereby makes hedging optimization much harder. Human traders need to manually adjust quantitative models based on their experiences to account for the incompleteness of the market.

Hedging automation is thus a crucial task because manual hedging has essential drawbacks such as high labor costs and limited order volumes.

A hedging strategy represented by a human brain.

Deep Hedging (Buehler et al. 2018) is a deep learning-based framework to automate hedging. It represents a hedging strategy with a neural network and seeks the optimum by improving parameters therein. Deep Hedging expects to slash up to 80% of costs and attracts high hopes as a “game-changer” of the derivatives business.

A hedging strategy represented by a neural network.

However, such optimization is easier said than done in practice. In quite a few cases, a neural network struggles to converge even after a considerable amount of training. It is a fatal problem for securities companies that have the mandate to undertake their customers’ orders quickly while accurately.

That is why we proposed a novel neural network that facilitates fast training in Deep Hedging. Proposed network attains 20x speedup in comparison to the preceding neural network. 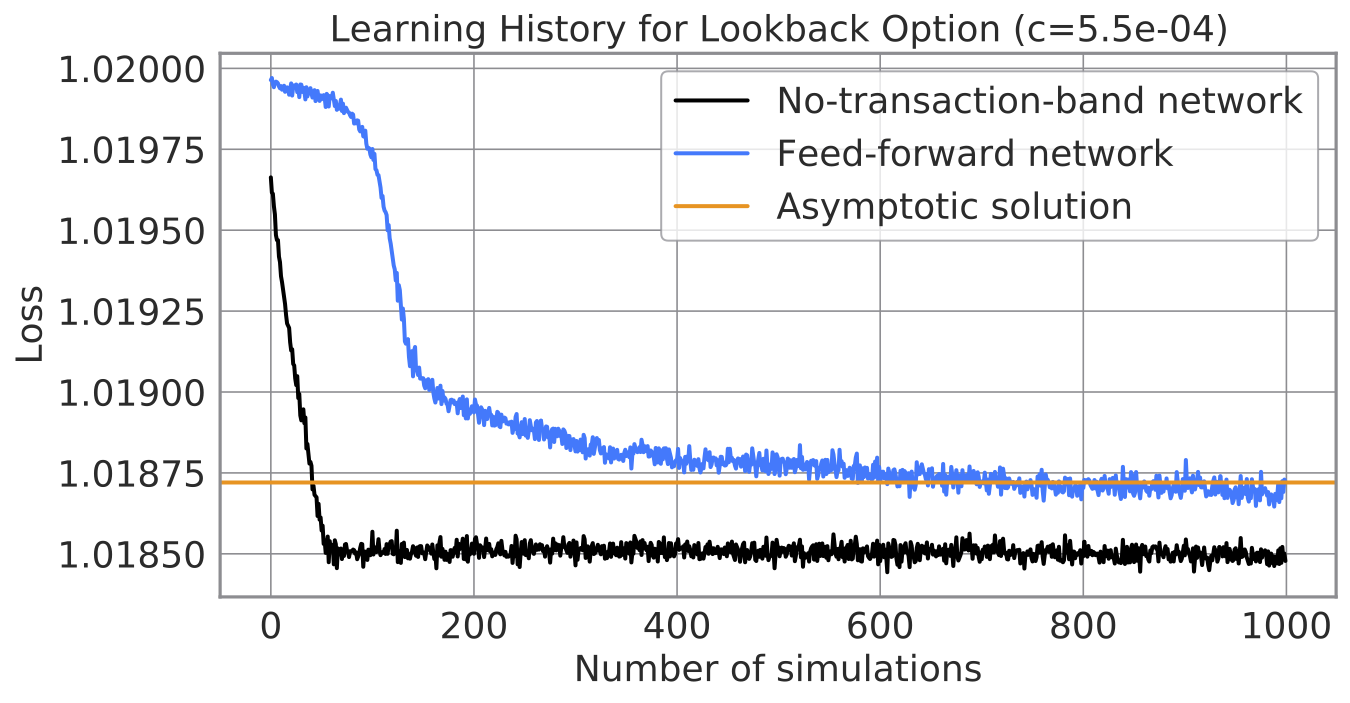 Learning curves of a neural network proposed in the original paper (blue) and our network (black).

Let us now formulate the hedging optimization. Note that the formulation below is abridged from that in the original paper.

The risk measure is the following loss function with \(u\) being a utility of the securities company. The optimal hedging strategy is the one minimizing this loss.

In other words, the optimal hedge maximizes the expected utility. Because the utility is monotone and convex, one has to increase the mean of the profit while quenching deviation. Since frequent re-hedging suppresses risk but increases transaction cost, one should re-hedge in the apt interval.

The central idea of Deep Hedging is to represent a hedging strategy \(\delta\) by a neural network. The network proposed in the original paper inputs the market information and the current position. The output is the position at the next time step.

A schematic figure of the neural network proposed in the original paper.

The neural network can approximate the optimal hedge through training. That is, we may want to simulate the path of stock prices, let the neural network hedge against them, and then tweak parameters therein to reduce the loss.

However, this optimization is easier said than done in practice. As shown in the learning history on top, it may not converge even after iterating 1,000 simulations. We conjectured that the difficulty is because the inputs depend on the current position. A neural network struggles until it observes many paths for which a neural network makes various outputs.

We proposed a “no-transaction band network”, a neural network that overcomes the difficulty of position-dependence. This architecture is as simple as follows.

A schematic figure of a no-transaction band network.

Let us remark on the second advantage before leaving this section. This strategy has long been studied as a “no-transaction band strategy” and proved to be optimal for European options and exponential utility. We theoretically proved that this strategy is optimal for a broader class of derivatives and utilities as well. This proof, along with the universal approximation theorem, guarantees that the no-transaction band network can represent the optimal hedging strategy. It is an indispensable guarantee for securities companies, which are mandated to offer the best price to their customers through the optimal hedge.

We performed numerical simulations to demonstrate the efficiency of the no-transaction band. We compare the following hedging methods for European and lookback options.

As shown in the learning history below, the no-transaction band quickly learns to hedge. While an ordinary feed-forward network struggles even after 1,000 times of simulations, the no-transaction band reaches its minimum in around 50 times. Preferred Networks’ MN-2 supercomputer completes it in seconds, which we expect is sufficiently quick for practical applications. 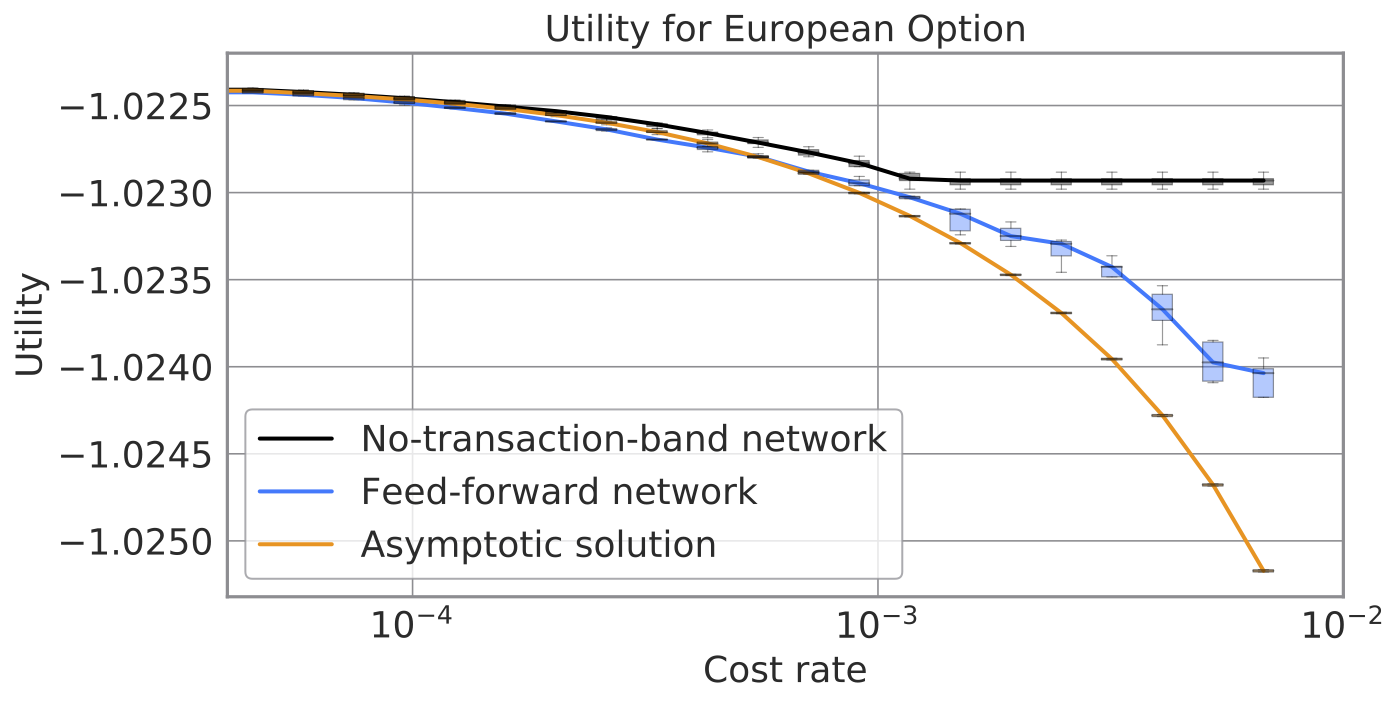 We computed derivative prices as well. Let us omit the pricing theory here and emphasize that a lower price is better for competitive brokerage businesses. The no-transaction band network attains prices up to several percent lower than the other methods. This discount is nothing but the value added to the security companies and their counterparties. Besides, tighter quotes provide liquidity to the derivative market. 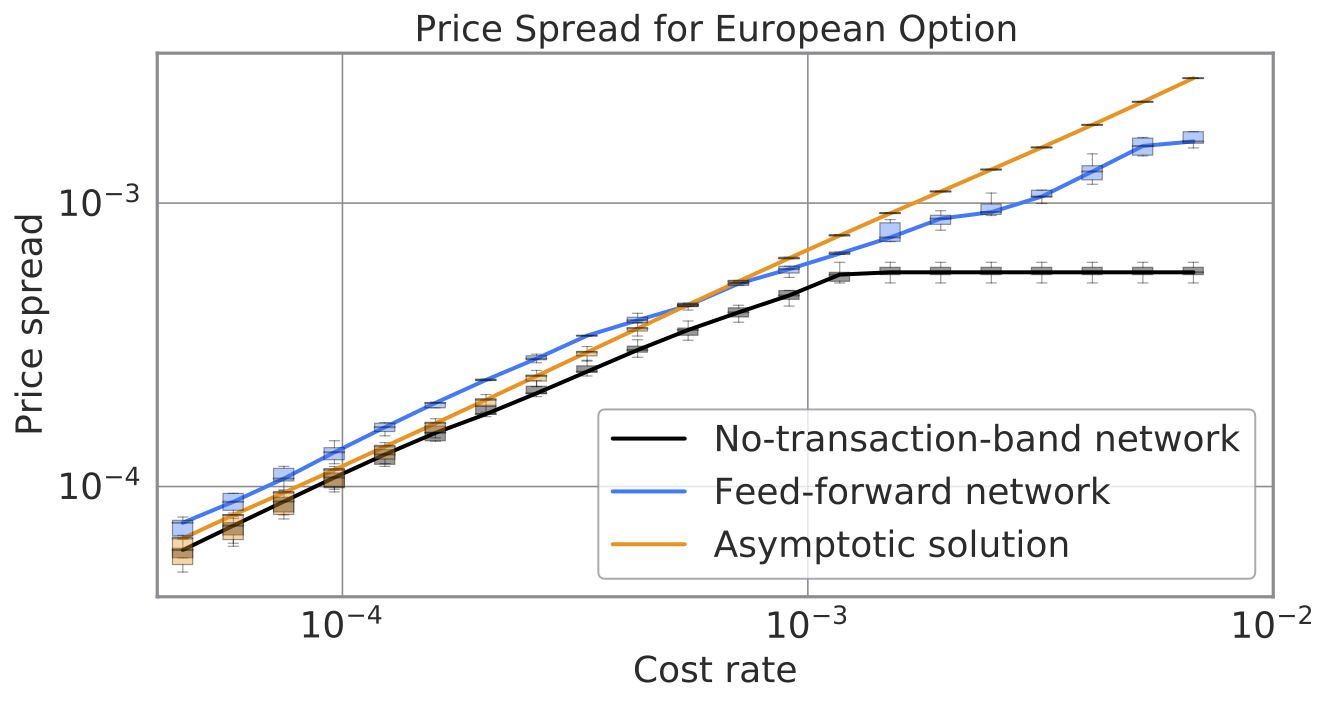 We provide minimal implementation to experience the efficiency of the no-transaction-band network in a GitHub repository: pfnet-research/NoTransactionBandNetwork.

We also released PFHedge, which is a PyTorch-based library for Deep Hedging. One can try out Deep Hedging with a code as simple as follows. We hope this library accelerates the research of Deep Hedging toward data-driven derivative business.

The no-transaction band network learns the optimal hedging strategy blazingly fast. It enables securities companies to meet their customers’ needs with quicker and tighter quotes while slashing operational costs. Also, a cost-efficient hedging strategy can handle high-volume orders and supply liquidity to the derivative market. While there are still practical challenges ahead of Deep Hedging, we are proud to have overcome one of the most challenging obstacles to lead technology-driven innovation in the financial industry.

We proposed the no-transaction band network by extending traditional research in quantitative finance to overcome the inherent problems of deep learning. It was a valuable experience for me to learn that exceptional ideas are inspired by leveraging different perspectives.

Collaborators’ generous mentoring and Preferred Networks’ abundant computing resources enabled these all achievements. Imos-san (Imajo-san) has proactively shared ingenious ideas to make the way out of challenging situations. Ito-san has shared a lot of expertise about quantitative finance, which was fresh for me. Minami-san has been so dependable when it comes to analytical approaches to the optimal control problem and vigorous and concise writing of the paper. Nakagawa-san at Nomura Asset Management has contributed both theoretical and practical issues in the financial market, which will be essential to look ahead of applications. Also, Preferred Networks’ supercomputer has been indispensable for research with a lot of trials. Let me conclude this article by expressing my great appreciation for Preferred Networks and Nomura Asset Management.