This post is a contribution by Zongyao Li, who was an intern at PFN.

I am Zongyao Li, a Ph. D. student at Graduate School of Information Science of Technology, Hokkaido University. I participated in the PFN summer internship program in 2022. During the internship, I did research on test-time adaptation for brain tumor segmentation with cross-institutional MRI. In this article, I would like to share our ideas and results in the research.

Mismatch between distributions of training and test data, which is typically referred to as domain shift, has been a long-term problem in the field of machine learning. The domain shifts between training and test data deteriorate the performance of machine learning models considerably. In the field of medical imaging, the above problem is quite common, and the domain shifts may arise due to different scanners and imaging protocols in different institutions. Figure 1 shows an example of the performance drop in the segmentation task for which we aim to reduce the domain shifts. Because it is extremely difficult and costly to obtain well-annotated medical images, a method that can tackle the domain shifts without using any additional annotations is desired. In this research, we worked on such a problem setting called test-time adaptation.

Test-time adaptation aims to suppress the performance drop on the target-domain test data by performing domain adaptation at test time with only the pre-trained source-domain model. Compared to the general domain adaptation setting, test-time adaptation is much more challenging since the source-domain data is inaccessible at test time. Moreover, the access to the target-domain distribution is also limited to some extent, while the limitation is not strictly defined and varies in different researches. In our research, we dealt with the most challenging setting in which only one test sample is available each time, and the continual test samples are not assumed to belong to the same domain. More concretely, we trained a brain tumor segmentation model with MRI data from one institution and performed test-time adaptation for MRIs from different institutions.

Figure 1. An example of performance drop when applying the source-domain model to the target domain for segmenting brain tumors with MRI (data provided by FeTS Challenge 2022 [1-3]).

Related work on test-time adaptation typically used an unsupervised or self-supervised regularization term to finetune the pre-trained source-domain model or part of the model. For example, entropy minimization, which is a common regularization strategy for training with unlabeled data, has been applied for test-time adaptation by training only the batch normalization layers to minimize the prediction entropy of the test samples [4]. Sun, Yu, et al. [5] introduced an auxiliary task of predicting the rotation angle of a rotated input into the training of the source-domain model and adapted the model at test time with the self-supervised task. In the work [6], another self-supervised learning strategy, contrastive learning, was used to finetune the source-domain model with target-domain images along with pseudo labeling. In particular, the authors also proposed methods that focus on medical imaging tasks. Li, Haoliang, et al. [7] trained the model to learn the source-domain prior information of semantic shapes, which is invariant across domains, and finetuned only the batch normalization layers at test time with consistency regularization. Similarly, another method [8] also shaped the source-domain priors of segmentation by training an additional denoising autoencoder to correct distorted segmentations, and at test time, a shallow CNN was trained to transform the test sample to reduce the domain shifts with the regularization from the autoencoder. It is worth noting that both methods for medical imaging [7] and [8] worked on the basis of consistent segmentation priors, which always exist in organ segmentation but may not be available in tumor segmentation since tumors have much wider varieties of shape, size, and position than organs. In other words, we still lack a test-time adaptation method that works satisfactorily for tumor segmentation.

To suppress the performance drop of brain tumor segmentation with cross-institutional MRI, we propose a test-time adaptation method with feature statistics alignment. Figure 2 illustrates the motivation of our method. To tackle the domain shifts, we aim to align the feature distributions between the whole training set and the test sample. Feature distribution alignment is considered a generally effective strategy for solving domain adaptation problems. However, in our research, the source-domain feature distribution is unseen since the data is inaccessible, which makes the previous feature alignment methods inapplicable to our research. As an estimation of the source-domain feature distribution, we propose to use the feature statistics (i.e., running mean and running standard deviation) stored in the batch normalization (BN) layers of the pre-trained model and assume that the features are normally distributed as the statistics characterize. Similarly, feeding the test sample into the pre-trained model, the feature distribution of the test sample is estimated as the normal distribution characterized by the mean and standard deviation (std) of the features. Then, we can align the feature distributions by minimizing the Kullback–Leibler (KL) divergence between the normal distributions. The loss function of our method is defined as follows: \[L=\frac{1}{B}\sum_{b=1}^{B}\sum_{c=1}^{C_b}\rm{KLD}\left(\mathcal{N}\left(\mu_{b,c}, \sigma_{b,c}^2\right), \mathcal{N}\left(\bar{\mu}_{b,c}, \bar{\sigma}_{b,c}^2\right)\right)\tag{1}\]
where \(B\) is the number of the BN layers, \(C_b\) is the number of channels at the bth BN layer, \(\rm{KLD}(,)\) and \(\mathcal{N}(,)\) denote the KL divergence and the normal distribution, \(\mu_{b,c}\) and \(\sigma_{b,c}\) denote the mean and std of the test sample features at the cth channel of the bth BN layer, and \(\bar{\mu}_{b,c}\) and \(\bar{\sigma}_{b,c}\) denote those of the running statistics of the training data. To minimize the loss of the statistics differences, we use two different adaptation methods described in the following sections.

Figure 3. Procedure of the normalizer adaptation.

In the research, we used the data provided by the Federated Tumor Segmentation (FeTS) Challenge 2022 [1-3]. The dataset includes MRI scans of 1251 cases each of which consists of T1, post-contrast T1-weighted (T1Gd), T2-weighted (T2), and T2 Fluid Attenuated Inversion Recovery (T2-FLAIR) modalities. Figure 5 shows an example of 2D slices of the four modalities. Annotations for the brain tumors are composed of the GD-enhancing tumor (ET), the  edematous/invaded tissue (ED), and the necrotic tumor core (NCR). Figure 6 illustrates the three tumor classes. The MRI data are collected from 23 institutions and partitioned by institution. As shown in Figure 7, the two largest partitions 1 and 18 include 511 and 382 cases respectively, and each of the others includes less than 50 cases.

Figure 7. Data distribution across 23 institutions/partitions of the FeTS Challenge 2022 dataset.

We used the dynamic U-Net [9] as the baseline segmentation model. We trained the model for 255 epochs using a RAdam optimizer with an initial learning rate of \(1.0\times10^{-3}\) and a batch size of 4. The normalizer network consists of three convolutional layers with kernel size 3, stride 1, and the number of filters 16 except the last layer. We trained one normalizer for each modality respectively, and the four modalities were concatenated as 4-channel inputs to the segmentation network. In the test-time adaptation, the normalizer and the BN layers were trained with an SGD or Adam optimizer with a learning rate of \(1.0\times10^{-3}\) or \(5.0\times10^{-3}\) for 20 or 50 iterations. The training hyperparameters changed along with different adaptation methods and scenarios. For the BN layer adaptation, we trained only the BN layers of the input block and the downsample block of the baseline model.

Table 1. Results training on partition 1 and testing on the other partitions.

Table 2. Results training on partition 18 and testing on the other partitions.

To explain why the test-time adaptation worked on only part of the partitions, we analyzed the correlation between the difference in feature statistics (i.e. the loss in Eq. (1)) and the mean Dice score without adaptation. Figure 8 shows the analysis results on partition 18 (left) and all except 1 and 18 (right) respectively. We can see a weak negative correlation in the plots, and the correlation coefficients shown above the plots also confirmed the correlation. This weak correlation partly supports our motivation which is to improve the performance by aligning the feature statistics between training and test data, and might also explain the incomplete effectiveness of the proposed method. 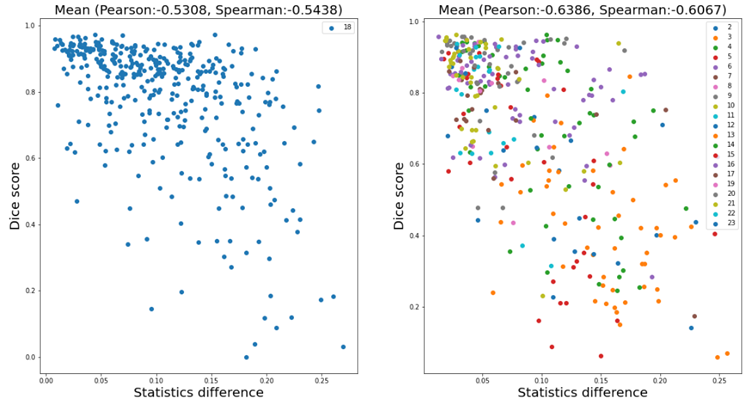 Figure 8. Correlation analysis between the difference of feature statistics and the mean Dice score without adaptation. The model was trained on partition 1. The left plot exhibits the results for samples in partition 18, and the right one for all except 1 and 18.

In this research, we proposed a test-time adaptation method to suppress the performance drop in brain tumor segmentation due to the domain shifts between cross-institutional MRIs. The proposed method clearly improved the segmentation performance for some cases with a large performance drop, while other cases changed little and some were even degraded. Therefore, the effectiveness of the proposed method was partly confirmed. Moreover, there is a limitation that the optimal hyperparameters (e.g. learning rate, number of iterations) for the test-time adaptation vary in different scenarios, which may make the method less practical since additional annotated data of the target domain would be needed for hyperparameter optimization. The development of robust test-time adaptation methods will be an important direction for future work.

I really appreciate my mentors Iwasawa-san and Tokuoka-san, and also Sugawara-san in the medical image team, for their kind help and advice during the internship. Thanks to the abundant computing resources in PFN, I could conduct extensive experiments and try many ideas in the seven weeks. I am grateful for the opportunity of the internship which was a very meaningful experience for me. 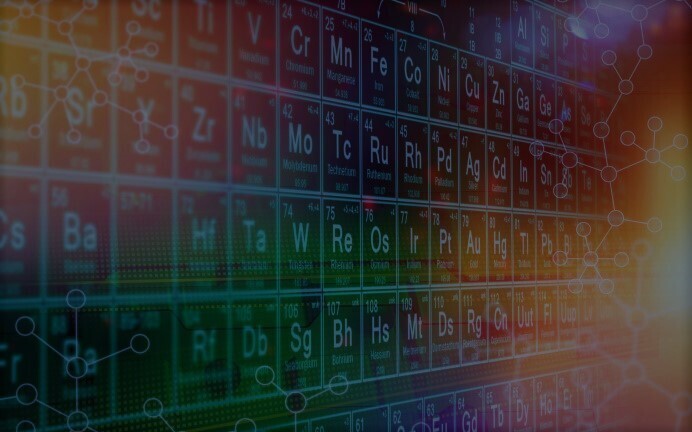