Hello! My name is Hitoshi Kusano. I participated in 2016 PFN summer internship program and have been a part-time engineer at PFN ever since, while also studying machine learning at Kyoto University. At PFN, my research topic was to teach an industrial robot how to pick up an object.
Based on the result of my work at PFN, I presented a paper titled ”FCN-Based 6D Robotic Grasping for Arbitrary Placed Objects” at the Learning and Control for Autonomous Manipulation Systems: The Role of Dimensionality Reduction workshop at ICRA 2017, the world’s biggest annual conference in robotics.

Here’s a movie showing how the robot grasps objects:

Below is an outline of my research on teaching an industrial robot how to grasp an object based on an image.
We’re looking for more people to work on advanced robotics at Preferred Networks. If you’re interested, please contact us!

Traditional approaches to grasp an object from image information often rely on object pose estimation or pattern recognition techniques to detect object-specific features in point cloud data. However, such approaches are ill-suited for use in objects placed in unstructured environments, or for use with complex end-effectors with high degrees-of-freedom (DOF) ※1, because they provide information about the state of the object, but not the state in which the robot or its end-effector should be in order to grasp the object. Therefore, these approaches make use of heuristics to select a configuration (i.e. joint angles, position, orientation, etc.) for the robot and its end-effector. Furthermore, detection of object-specific features may fail or provide false positives on either deformable objects or objects unknown to the system. The recent advances and popularity of deep learning have given birth to new methods for grasping that are able to directly generate the configurations of the robot as well as its end-effector, and these are called end-to-end learning of grasping ※2. As end-to-end learning of grasping based on machine learning, Pinto2016, Levine2016, Araki2016, Guo2017 are known. When we think about the usage of complex end-effectors or in unstructured environments for the real application, it is required to predict a grasp either from arbitrary pose or with higher degree of freedoms. However, prior works can predict a grasp from only above orientation, and couldn’t predict 6D grasp pose (arbitrary pose in 3-dimensional space, namely x, y, z, w, p, r) ※3.
※1. The end effector is the part of the robot that interacts with the environment, such as a hand.
※2. End-to-end learning is a learning approach in which a model represents the correspondence between input and output of the system.
The recent popularity of deep learning have proven the efficacy of the approach. In this research, our model employs an end-to-end learning with correspondence between an RGB-D image as an input and grasp pose as an output. Compared to usual learning approach with separated tasks, the approach generally has 2 benefits.
1). With a smaller number of models and hyperparameters, it is easier to select hyperparameters.
2). It is said that to avoid the loss of information accompanied by model separation enables the higher performance if it learns successfully.
※3. Each of w, p, r means each rotation around the z-axis, the y-axis and x-axis. 6 parameters composed of x, y, z, w, p, r represents an arbitrary pose in 3-dimensional space.

These prior methods, however, have a disadvantage when applied on higher DOF end-effectors or when there is a need for increasingly complex grasp strategies as it becomes more and more difficult or even impossible to annotate the data. Therefore, such methods rely on low dimensional annotations making them unable to output 6D grasp configurations.
In this research, we achieve an End-to-end learning to grasp arbitrary placed objects.
We have 2 contributions. 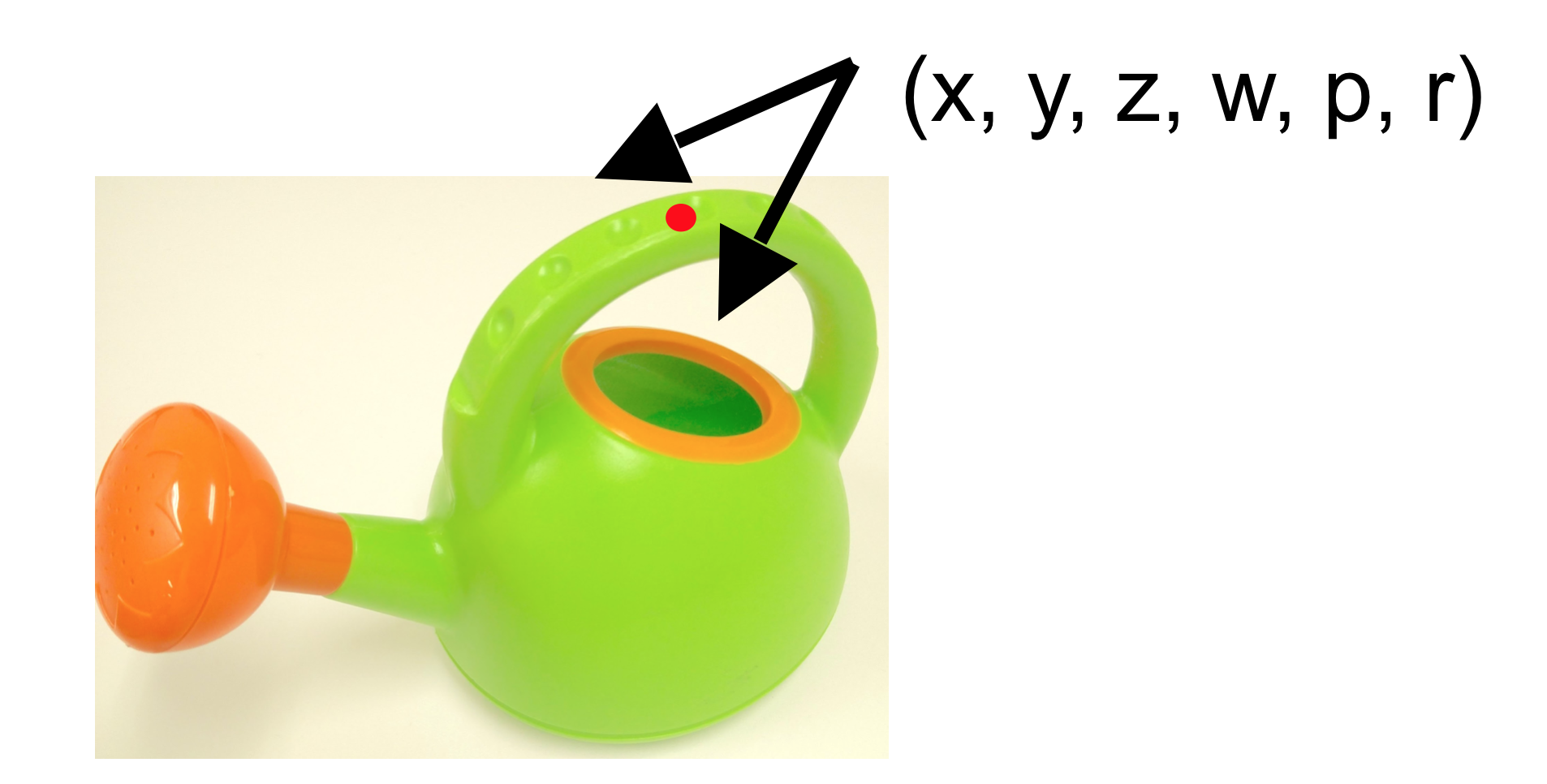 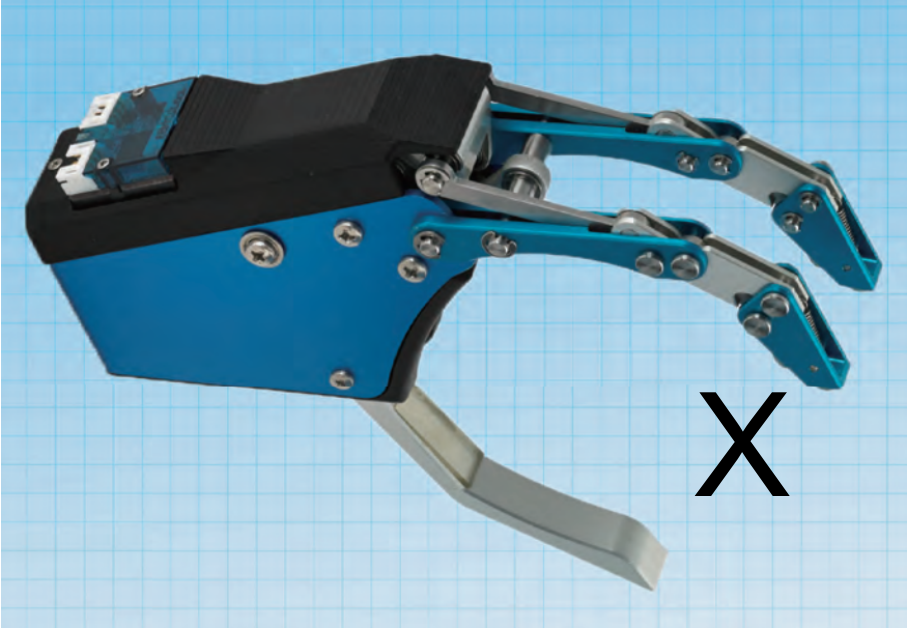 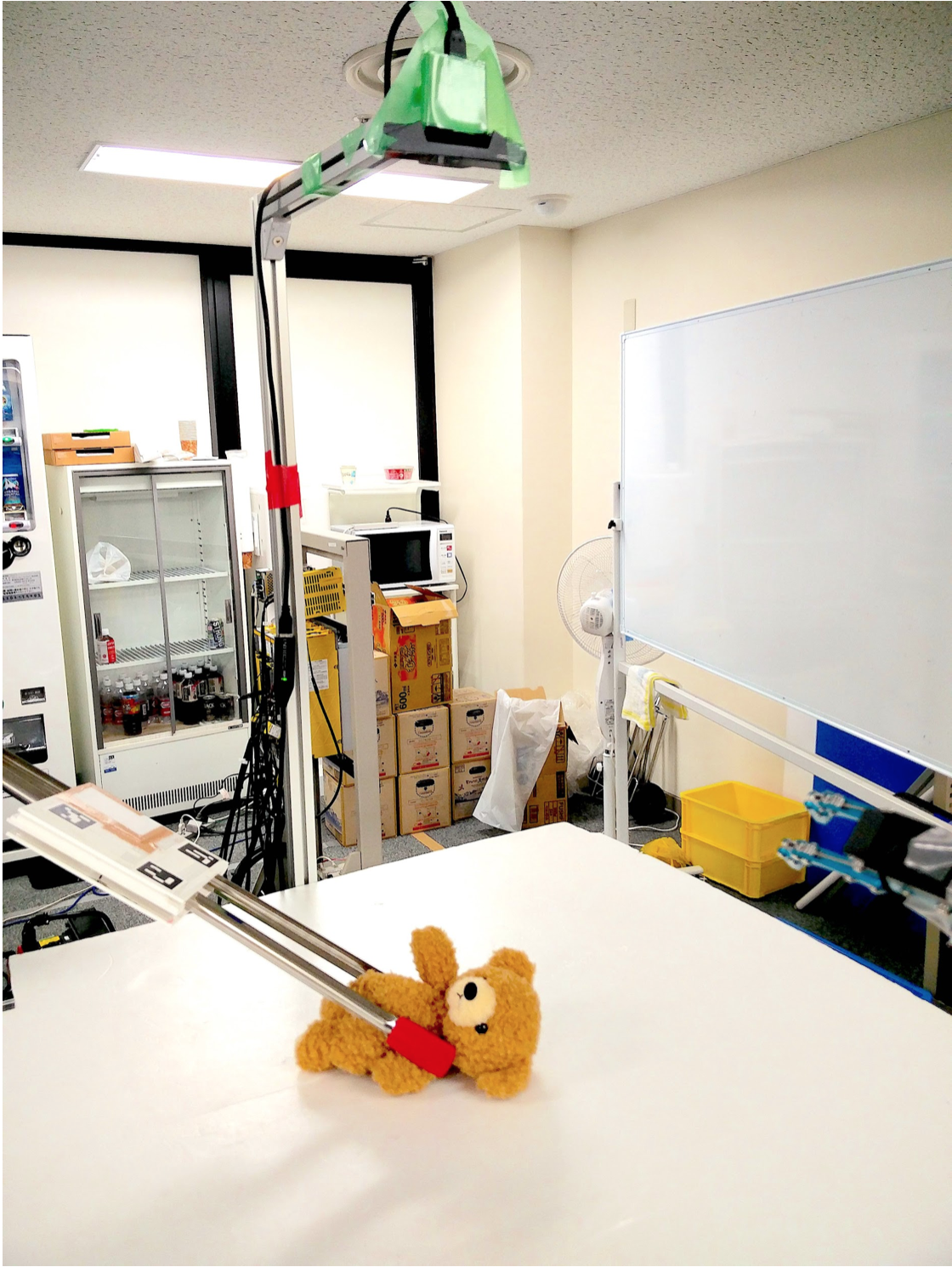 The environment for system test is shown here. 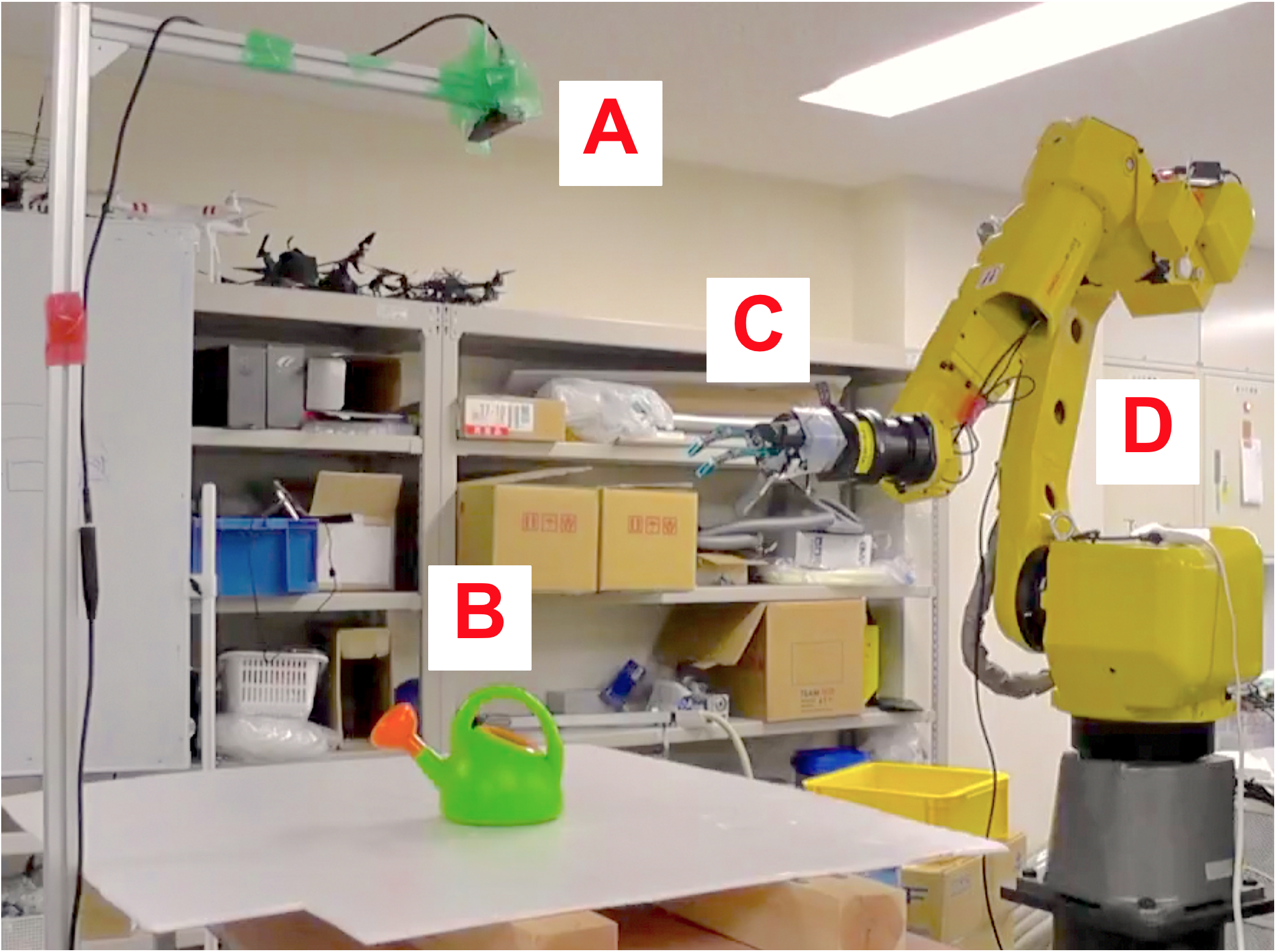 Example outputs of our network are shown here, displaying the ability of our network to propose different grasp configurations for the same (X, Y) location for multiple items. In the middle and right figure, we show grasp candidates. The bottle is standing upright. This network successfully predicts grasp candidates utilizing a rotational degree of freedom. 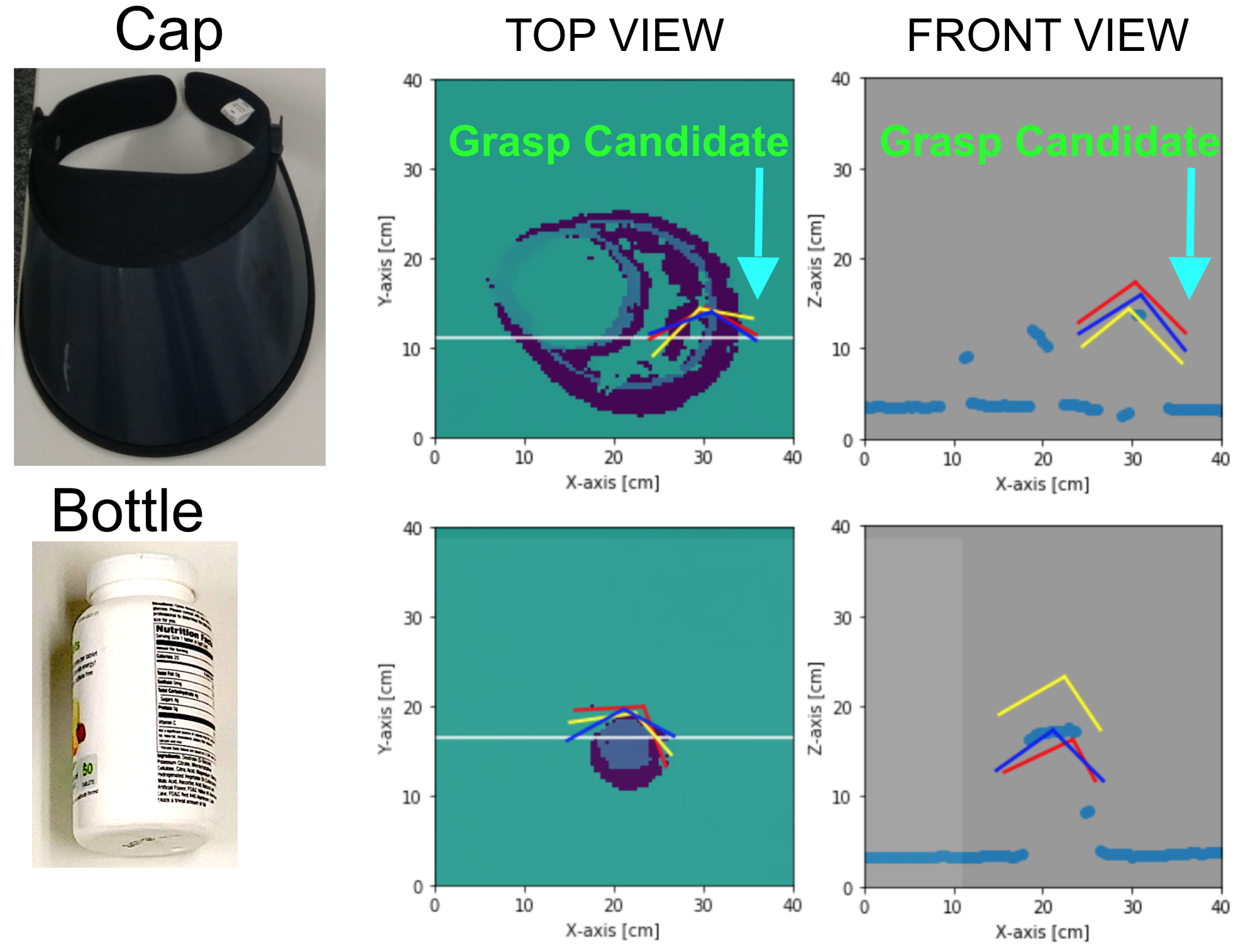 We have conducted experiments to command a robot to pick on twelve objects with different rigidness and shapes. Data Collection was performed for only objects shown in left. We define success as whether an object is grasped or not when a robot moves back to an original position in full system test. The low success rate of pipe can be explained by the camera not being able to capture the differences in depth due to its complex shape. 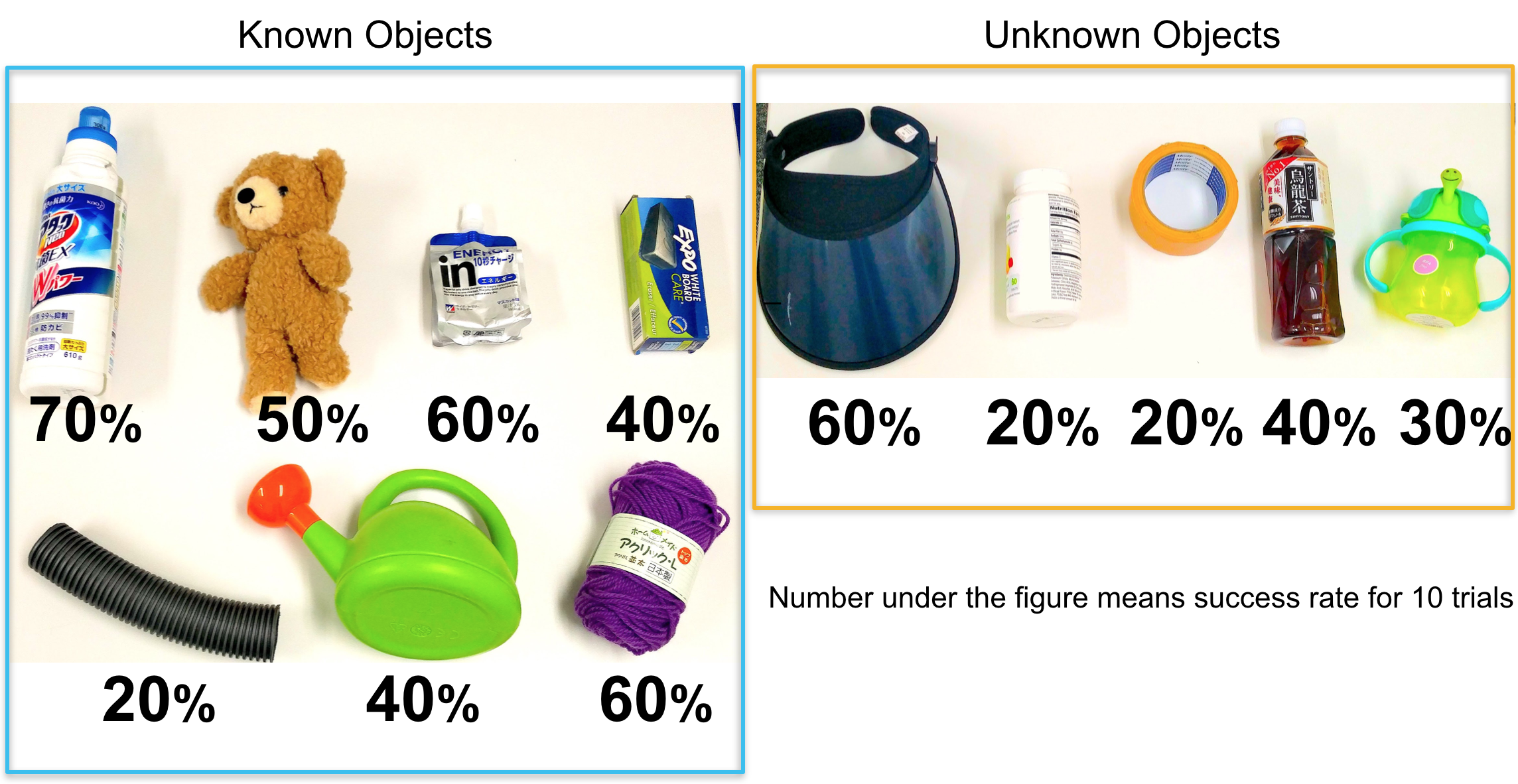 Finally, video of full system test is shown below.
This video plays at double speed.

For further detail, our proceeding and presentation slides are available online.
kusano_2017